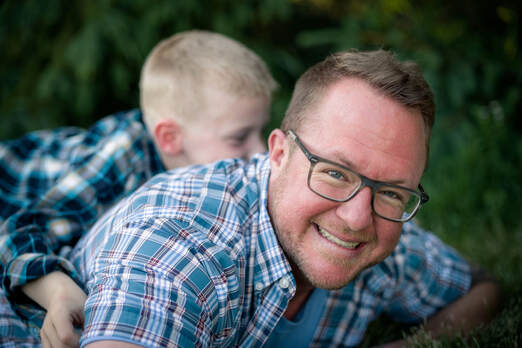 Brice D. Smith is an independent historian, activist and philanthropist. He is best known for his work on the Milwaukee Transgender Oral History Project and his biography of Lou Sullivan, which was a Lambda Literary Award finalist and university common read selection. Dr. Smith lives in Milwaukee, Wisconsin with his wife and two sons.

Raves and Reviews for Lou Sullivan: Daring To Be a Man Among Men

“To witness Sullivan’s struggle to find himself, and then watch him turn—in the face of certain death—to extend himself in the service of others, is a remarkable experience. Solidly informative and inspirational: Anyone interested in gender-related social movements, or the potential for one modest yet dedicated human being to change the world, should meet Lou Sullivan through Brice Smith's insightful work.”
—Jamison Green, author of Becoming a Visible Man

​In 1961, Lou Sullivan was a Catholic schoolgir​l growing up in the suburbs of Milwaukee; in 1991 he was a gay man dying of AIDS in San Francisco, looking back on decades of activism and wondering if his life would be remembered.  In this inspiring and deeply researched biography, Brice Smith offers a moving portrait of one of the U.S. LGBT community's most accomplished yet unsung leaders​. He adds a long overdue chapter to queer history in recounting Sullivan's pioneering role in forging a national network of trans men, his bottomless curiosity about the transgender past, his successful crusade against the denial of transition-related health care to gay trans men like himself, and his final battles on behalf of people with AIDS. Smith's meticulous reconstruction of Sullivan's all-too-short passage through this world allows those of us living now to​ draw strength from the example of a long-gone man whose life is still worthy of emulation.
—Susan Stryker, Ph.D., author of Transgender History, Barbara Lee Distinguished Chair in Women's Leadership, Women's Gender and Sexuality Studies, Mills College

The immeasurable research and care given by Brice Smith to Sullivan’s story of self-realization is a gift. Lou Sullivan: Daring To Be A Man Among Men is a welcome contribution to the annals of trans history, one that breaks the mold of what we have come to expect in a transgender narrative. Smith’s account of Lou’s self-realization takes us on a journey through the latter half of the 20th century’s subcultures and activist groups—through the barriers of the established “gender professionals,” into the darkness and delights of the Golden Age of the gay liberation movement, shedding light on the diversity of trans experiences. Essential reading for anyone concerned with the history of gender.
—Rhys Ernst, artist and filmmaker; producer of We’ve Been Around and Transparent

Dr. Brice Smith's Lou Sullivan: Daring To Be A Man Among Men provides an invaluable and timely service to scholars of queer history, trans people and all lovers of biographical storytelling. In this plain-spoken, carefully documented chronology, Smith offers an unsparing look at the life and times of this pioneer of gender authenticity. From the gay liberation struggle in post-Stonewall Milwaukee to the onset of the plague years in San Francisco, Smith digs deep into the Sullivan collection in the GLBT Historical Society archives (of which he was a founding member) and other sources, walking us through Sullivan's struggles to claim his identity and sexuality as a gay man, transition as an FTM, find community and acceptance - and all the while paving the way for others to follow. I am grateful for the opportunity to walk in Lou's shoes for a little while, and gain a better appreciation for my community's history and for my FTM comrades.
—Terry Beswick, Executive Director of GLBT Historical Society